Connecting the Lab,
One Instrument at a Time

In the heart of Cambridge, Massachusetts— three floors below one of Harvard University’s picturesque courtyards — is a laboratory that is home to hundreds of cages holding mice and rats. As at most academic animal facilities, technicians arrive at daybreak and spend a couple of hours inspecting each of the 8,500 cages for signs of damage, escaped rodents, or any other problems, writing down their findings. This year, in a change from usual procedure, Harvard staff replaced their paper checklists with records completed on a smartphone app.

It may only be a minor technological improvement, “but this can be a tool for us to better manage our operations” says Ethan Hildebrand, the facility’s animal systems coordinator. To illustrate his remark, he turns to his iPhone to check which daily, weekly and monthly tasks have been finished across the dozens of rooms in the 6,500-square-metre facility. 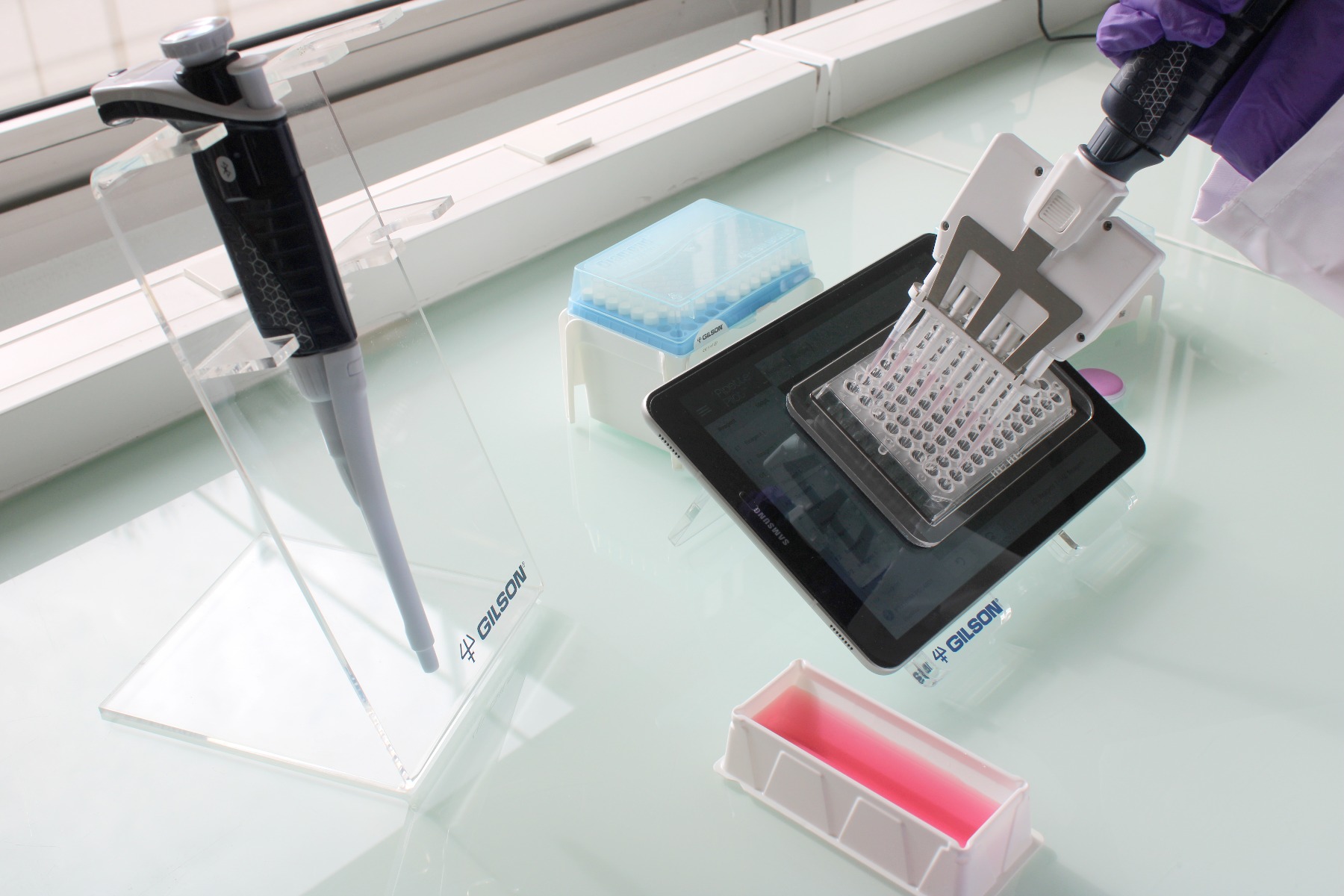 Gilson, one of the leading providers of liquid handling equipment, is developing a suite of internet-connected tools that could help researchers work more efficiently and reliably. Credit: Gilson

The director of Harvard’s Office of Animal Resources, Steven Niemi, hopes to introduce more remote monitoring to the lab with cloud- connected devices to track things like cage conditions and animal health. That, he says, “will give us a more comprehensive and more accurate profile of how the animal is doing at any given moment.”

The director of Harvard’s Office of Animal Resources, Steven Niemi, hopes to introduce more remote monitoring to the lab with cloud- connected devices to track things like cage conditions and animal health. That, he says, “will give us a more comprehensive and more accurate profile of how the animal is doing at any given moment.”

The new regime is indicative of the way in which many scientists are embracing connectivity and cloud computing to improve operations. By replacing analogue technology with digital apps and devices — smart gadgets known collectively as the Internet of Things (IoT) — researchers hope to reduce error, improve reproducibility, ease record-keeping and, ultimately, enhance experimental results.

Here are four other ways that scientists are embracing IoT and upping their research game.

At Stanford University in California, bioengineer, Ingmar Riedel-Kruse, and his lab group have built 12 low-cost microscopes, each connected with a webcam and four light-emitting diodes. Through an online interface, researchers can log in remotely and adjust the light intensities beaming down from the scope, thus controlling the behavior of Euglena, a single-celled protist that moves away from light. “It’s real-time interactive,” Riedel-Kruse says.

So far, the cloud-based experimental setup has mostly been used for educational purposes, either by middle- or high-schoolers or as part of an online college course. But Riedel-Kruse is now collaborating with biophysicists around the world who are testing theoretical models of light-responsive behavior on his platform.

You can move the joystick around and see what the effects are. You can play around, formulate hypotheses, and then run more controlled experiments.

Not only does the remote lab spare others the cost of investing in the infrastructure, it also gives remote researchers a high level of control. “You can move the joystick around and see what the effects are” Riedel-Kruse says. You can play around, formulate hypotheses, and then run more controlled experiments.”

For those more skilled in the art of pipetting — a fairly large group, given that these liquid handlers are among the most widely used devices in the biological sciences — there is now the option of a smart upgrade.

This year, Gilson unveiled an all-in-one kit called TRACKMAN® Connected to enhance the smart pipette experience. Connected to its new Bluetooth®-enabled PIPETMAN® M Connected , the tablet with the apps pre-loaded PipettePilot™ and PipetteScope™, guides researchers in real- time through pipetting protocols, automatically records the data, and provide a complete report of all protocol step execution, which can then be saved either locally or shared on SciNote, a cloud-connected electronic lab notebook. This kit includes also an environment sensor for wirelessly monitoring the protocol environmental conditions: temperature, humidity and pressure.

Biochemistry graduate student Valentina Garcia got her hands on the full package in February 2018. Her research on the malaria parasite often involves large drug screens — and in the past, Garcia admits, she has messed up assays after pipetting in the wrong row of a 96-well plate or forgetting to pipette in another.

Valentina likes the fact that, with Gilson’s smart electronic pipette, she has a digital record in space and time of all her pipetting activity. “It’s really great for these high-throughput assays where I’m just doing the same thing over and over and over again,” she says. “It’s going to make my experiments more consistent and reliable.” And crucially, she adds, the connected pipette adds this digital functionality without forcing her to change her routine or experimental protocols in any way.

Thanks to mobile phone technology, scientists in resource-poor parts of the world can also now bring the benefits of modern laboratory instrumentation anywhere their research takes them.

In Malawi, for example, Frank Mnthambala and his team of crop scientists are using a handheld device known as the MultispeQ to non-invasively record aspects of leaf physiology, including photosynthetic parameters and chlorophyll content, along with environmental conditions such as light intensity, temperature, humidity and more. The tool — developed by plant biologist David Kramer and his colleagues at Michigan State University in East Lansing — then connects seamlessly via Bluetooth to a smartphone or computer to upload the measurements to an online database.

“It’s one of the safest ways of keeping data,” says Mnthambala, who runs an agricultural consulting company in Malawi’s capital, Lilongwe. It also provides a level of technical sophistication that wouldn’t be possible otherwise in a developing country like Malawi.

With MultispeQ, Mnthambala has led efforts to test for drought tolerance in varieties of soybeans, identified which imported sunflowers grow well in the Malawian soil and examined fertilizer and water management practices for maize. As a bonus: since all the data are in the cloud, Mnthambala can easily confer with colleagues halfway across the world about his findings. “Everyone can access the data,” he says, “which means you can get real-time feedback.” 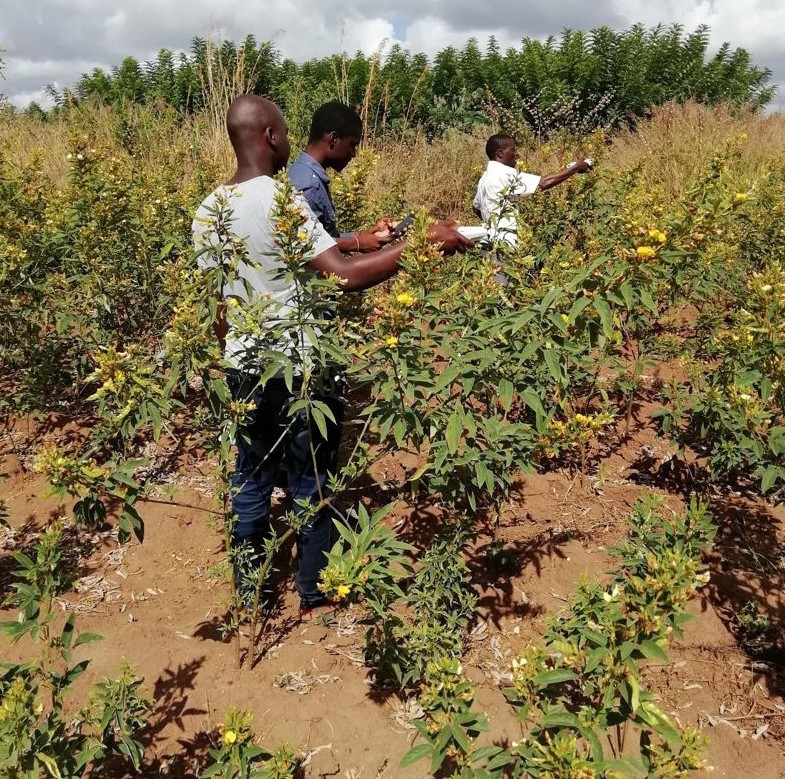 Researchers at Makoka research station in Malawi use the handheld MultispeQ analyser to record plant and environmental data in the field and upload it to the cloud. Credit: Frank Mnthambala

Two years ago, James and DeLacy Rhodes bought an Amazon Echo — and began, like most smart-speaker users, asking Alexa to do mundane things like check news headlines, play music or set a kitchen timer. But James, a software engineer, and DeLacy, a microbiologist, quickly realized the device would be much more useful if placed in DeLacy’s lab at Berry College in Mount Berry, Georgia.

“That’s somewhere where a hands-free environment could really boost productivity,” DeLacy says, noting that it would allow her students to reference protocols, order new reagents or get safety information without having to take off their gloves. James set to work programming a lab assistant add-on to the voice-controlled device and, within a few months, Helix the automated lab helper was born.

Teaching Helix to understand the lingo of lab science hasn’t always been easy. James had to tweak the code to phonetically spell out supply company names like Qiagen (“Kayagen”) and the ways that scientists commonly refer to restriction enzymes such as Bgl1 (“bagel-1”). With those kinks worked out, though, dozens of labs across the US have begun pilot-testing the platform, and a commercial product could reach the market by the end of the year.

As with many IoT applications in the laboratory, “this is a new technology being used in a new place, so there’s a lot of learning that has to be done,” DeLacy says. But in the long run, she adds, it should help make lab life easier and more productive for everyone. 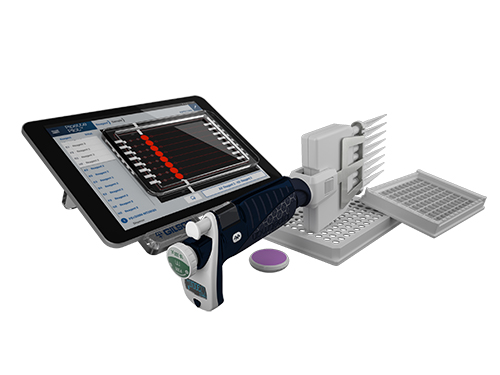 TRACKMAN® Connected is a tablet with exclusive accessories and applications that make pipetting on 96- and 384-well plates faster and more reliable, improving your efficiency at the bench by tracking your pipetting tasks. Designed to communicate with PIPETMAN® M Connected via Bluetooth®, the tablet interacts in real-time with the pipette and guides you through your protocol with PipettePilot™.